What is the optimal pump or press for highly viscous and sticky mashes, pressing fruit, separating solids and liquids, dewatering fresh whole hops and kettle trub? Does it have multiple uses and applications or tailored specifically to the brewing industry? Craft brewing industry? With the smaller brewer in  mind?

What’s important in the design? Cost, size, ease of cleaning and CIP integration? Increasing brewhouse efficiency?  Functionality and alternative uses in the brewhouse? Size and mobility? Retrofit-able to existing brewhouses?

Our solution... currently under development and in the design house is tailored towards the small craft brewer where cost, ease of use, mobility and integration are of high value.   We are taking the best of all design concepts to integrate a single effective Mash Filter Screw Press for the small craft brewer.  Check out some of the designs currently on the market and give us some feedback on your top priorities... 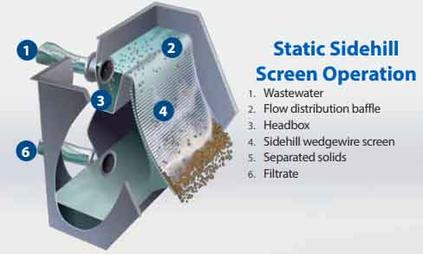 A major innovation in screw press design was patented in 1900 by Valerius D. Anderson. His U.S. Pat. No. 647,354 describes how interruptions can be made in the flighting of the screw. This results in improved performance on slippery or slimy materials such as spent brewers' grain, orange peel, fish, and rendering offal. The use of screw presses with interrupted flights rapidly came to dominate in these applications.

One very old application for a screw press is dewatering spent brewer's grain.  Valerius Anderson mentions that his invention of the interrupted flight screw was "one capable of handling brewers' slops, slaughter-house refuse, and like material which oftentimes is so soft and mushy as to be handled only with difficulty".

Beer, of course, can be made from a wide range of grains. Most commonly wheat, barley, corn and rice are used. After the fermentation process, wet fiber, called spent brewer's grain, is a waste residue. It is mainly used as animal feed.  As spent grain comes from the brewery it is high in moisture content, generally 78% to 86%. Sometimes the spent grain is pumped to a filter screen, like a sidehill, to drain off some of the free water.

Larger breweries used to dry their spent grain down to 10% moisture and sell it, usually in pellet form. This commodity is known as DDG, Dried Distillers' Grain. Production of DDG involves first pressing the waste and then drying the press cake in a rotary drum dryer.  Not really an option for the small craft brewer.

Competitors known in the brewery industry include Ponndorf and Vetter. Features of the Vincent press which result in superior performance include tight pitch flighting in the inlet hopper, a tapered shaft screw design, flight notches, and the use of wing feeders.  Flighting is the helicoid (corkscrew) surface that wraps around the shaft of a screw, somewhat like threads on a rod.

An improvement to the Anderson design was the addition of stationary resistor teeth. These are mounted, fixed to the frame of the machine, so that they protrude through the screen at the locations where the screw flighting is interrupted. The teeth are in the flow of material passing through the press. They can range in length from very short to reaching almost to the screw shaft. They cause stirring which both reduces co-rotation (slippage) tendency and puts wet material against the screen.

A weakness of the single screw press is that, lacking positive displacement, excessive slippage can occur in the press. Thus difficult (slimy) materials can tend to co-rotate with the screw, resulting in a loss of both throughput and dewatering capacity. The amount of compression that can be applied to a material is limited by its tendency to slip, even in interrupted screw machines. 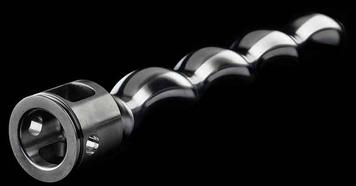 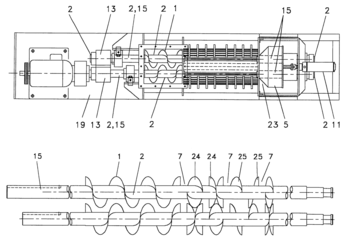